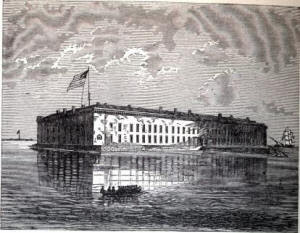 “The Ball Is Opened.Fort Sumter Fired On, Fighting Like Hell!”

On this day April 12, 1861 the Civil War started, and Schuylkill County had another first in the history of this country.

Several years before the opening of the rebellion, Mr. John C. Beck of Pottsville, recently deceased accepted a position as foreman on the Wilmington N.C. Herald. As the time drew near when it was apparent that war must come. Mr. Beck quietly began to make arraignments to return north. There was a strong Union sentiment in Wilmington, but not enough to secure absolute protection to advocates. The editor of the paper fervently was apposed to secession but there were controlling interests in the papers directorate that loved him to its course of supporting the south. On the day on which Fort Sumter was fired on, April 12, 1861 Mr. Beck was in consultation with the editor of the Herald. When the assistant entered the editorial room entering under extreme excitement. As Mr. Beck turned to the stairs leading to the copy room he overheard the editor say, “Tell Beck.” Mr. Beck was recalled into the office and he was there informed that the Herald was just in receipt of a telegram announcing the firing on Fort Sumter. He was advised to consider his sentiments and to remain with the paper and denied further inducements being offered.
But there he refused. He asked a special favor permission to telegraph the news to the Miners Journal, but was told that all communications north had been stopped, and that it might be impassible to gratify his request. 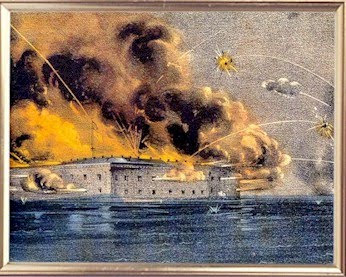 However, he was advised that if it was at all possible to get the news through it might be done for him. He then completed the message as received by the Herald. “The Ball Is Opened. Fort Sumter Fired On, Fighting Like Hell!”. The message did get through to the Journal. On its receipt Mr. Benjamin Bannan, was greatly excited took the telegram up to the Miners National Bank, and showed it to Mr. Isaac Beck, saying, “I have just received this message from John, I can near believe it!”
Whatever John has said must be true, try to have it confirmed,” was the reply. Mr. Bannan immediately got a communication with Philadelphia, and then New York and they had heard nothing, saying it was very difficult to hear from the south. But that if there was any thing within the message they would have immediately heard... But they did not until they had the actual message. So Pottsville was the first place in the north to hear of the opening of hostilities, and a fellow townsman Mr. John C. Beck, had the distinction of being the sender of the message.

This letter is in the files of the Historical Society of Schuylkill County.
Posted by Stu Richards at 7:49 PM

Great story, Stu! Thanks so much for sharing this bit of Schuylkill County history in such a timely manner as we commemorate the 150th anniversary of the Civil War.

I have a few Schuylkill County Civil War articles in the works. Check Small-leaved Shamrock in a few days to begin reading.

I understand that you are responsible for the upcoming 150th anniversary celebration of the Civil War on Saturday, April 16th involving Civil War Music and Poetry composed by Schuylkill County soldiers. I won't be able to attend, but am very interested in learning more about the music and poetry you plan to include.