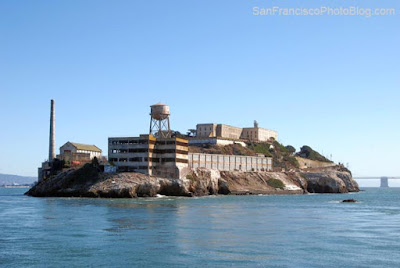 Private Charles R. Schatstein of Pottsville was brought home from fighting in the Philippines, were he saw active service fighting against the Filipinos. He was in a very serious condition and admitted to the hospital at San Francisco. After he recovered he was assigned to duty with Company No.2 of Convalescent stationed at Alcatraz Island.


Dear Parents:
Alcatraz is a small Island situated northwest of San Francisco direct by north of the Presidio. It lays in about the middle of the bay and has a swift current running around it so that a small boat has a hard time to land.
The U.S. uses it for a military Prison, but before but before they got it was an old Spanish Fort. Its area is about 12 acres and is solid rock. Known in and about San Francisco as the Rock.
It is well fortified and has quite a few large guns on it. Most of them being 12 inch . To me it looks like a large stationary battleship.
The prisoners are men who have been soldiers but have been dishonorably discharged from the service. Their imprisonment ranges from six months to 50 years. They are divided into three classes according to their conduct in and about the prison. When they enter the prison they are all second class and are made first class or third class according to the way they conduct themselves while at work. They are distinguished by the bands on their hats, white, red and yellow, meaning 1st, 2nd and 3rd class respectively. The first class are trusted men and allowed to go around without a sentry. Some work on the dock, some drive teams some are painters, bakers, farmers, general police, lamp lighters and almost everything imaginable.
Second Class haven’t got it quite so good. But third class is kept to work from 7 to11:30 a.m. and from 1 to 6 p.m... They are not allowed to talk, smoke or even stop work for a minute and must walk lock step to and from work.
There are six different prisons and the will accommodate about six hundred prisoners. Three prisons being old and three being new. There are at present about 400 hundred prisoners.
To guard these prisoners there are two companies, Co H of the 7th Infantry and Convalescent Co. No 2 composed of men who have been sent back from China and the Philippines sick or wounded. I have become well enough to do duty in both companies which are not full, there are about a 150 men for duty giving us about four night in the duties of a guard and other military duties which give us little time to ourselves. Out near the eastern part of the island is a light house kept by an ex soldier. And right at the end is a fog bell and tide gate all kept by the same man. The fog bell is wound up by a large key and runs down like a clock. This bell is kept wound up and as soon as it begins to get foggy it is started and will keep going for 24 hours unless stopped.
We also have two life saving crews here composed of soldiers out of the two different co0mpanies. But our boat is gone now. The other day three prisoners escaped from the prison ward of the hospital picked the lock holding the boat and they haven’t been heard of since.
The beginning of last month a trusted prisoner who worked in the carpenter shop made a box and got some one to nail him in and carry him down to the dock so that night when the boat came to get the guard that brings the prisoners back that go to Presidio to work, he was put on the boat and put out off on the main land. He had it nicely arraigned to have some person open it, and in that way he got a way, but we got him back a few days afterwards, he was caught at Sacramento. He said some one gave him away to get the award of $15 dollars. Poor fellow has ten years to serve now.
We also have a reading room and pool room, shooting galleries, dance hall and last but not least a canteen where the boys go to get on their jollification so you see we have lots to keep us busy.

I guess that will be it for a while