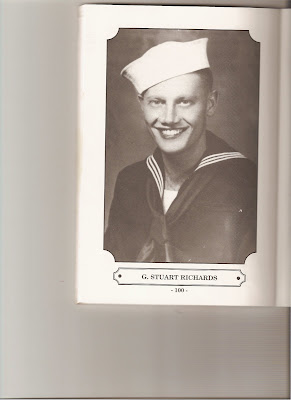 The 83 footer story began in 1940 when the first of 230 cutters was built for the USCG. The wooden cutters were used for convoy duty in the Gulf and ASW patrol off the east coast of the U.S. 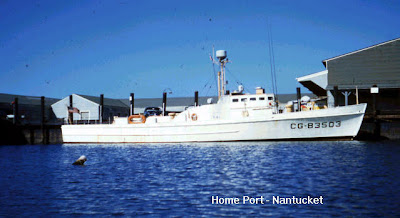 My Dad Seaman 1/C G. Stuart Richards enlisted as a seaman in the United States Coast Guard on September 24, 1942. He entered the USCG at Curtis Bay, Md. And was subsequently stationed at Ocracoke Station, N.C. located near Cape Hatteras. Dad served as a sonar operator and a 20 mm gunner on board an 83 foot sub-chaser. They were assigned the duty of patrolling the east coast of the U.S. looking for German U boats.
My Dad told me this info:
“I was assigned duty on board an 83 foot sub-chaser with the designation CG-83-301. They were too small a craft to have a name. They were made of wood and had a top speed of about 30 knots. We carried 12 Depth charges on board, 2 on each launcher and 2 set on a Y gun located in the center of the ship. The crew consisted of 22 men and officers. Our skipper was a commander. The ship was pretty confined and you slept on a rack that hung from the ceiling by chains. The enlisted men slept in the forecastle. My job on board was as a sonar operator who listened for the underwater sounds of a sub. The equipment we used consisted of a sounder that sent out a signal and a wheel that was located between your legs. This had a compass rose on it. By turning in it you could tell what direction you were listening in. if any subs were out there, the sound would echo of their hull and return to the gear. Sometimes you would pick up the sounds of fish or the propellers of other ships. You had to learn the difference between the sounds. You got a bearing from this information that could guide the ship toward the sub. The sonar room was a small room located aft of the forecastle and you could only fit two men in there. After a sub was found, we went to general quarters where I manned a 20 mm gun.
We helped chase down a few German subs, we think, we saw a lot of oil slicks when we fired depth charges but you never knew. I picked up a German life preserver and light that I kept. We also got a commendation medal for helping to get a yacht out of a mine field. We had to go in there and tow them out. What they were doing in there during wartime was pretty unusual and really dumb. 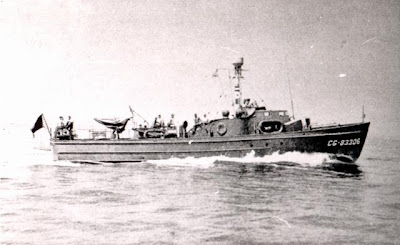 On Patrol
My last trip on CG-83-301 was on September 30, 1944. we were on a patrol when we had a fire in the engine room and were called to general quarters and then started to fight the fire. I was using a fire hose in the hold above the engine room when there was a big explosion. The boiler blew up and threw me backwards pretty far. I landed against an ammunition can for the 20mm. I broke my back, crushing three vertebrae. I couldn’t move my lower body. The ship was pretty well damaged. The whole side, from mid ship to the stern, was wrecked. We didn’t sink because all the water tight doors were closed. It took 4 to 5 hours to get us into Portsmouth where I went into the Naval hospital and spent the next 20 months recuperating. I was then discharged from the Coast Guard. 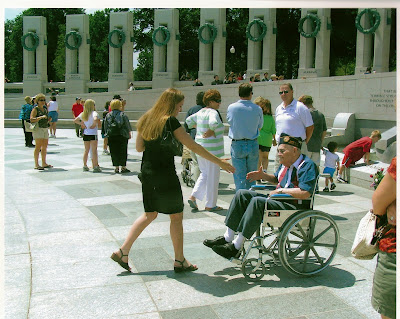 My brother Rick and his wife Sally took Dad to visit the memorial in June of 2004. He was so happy, many people came up to him and thanked him for his service.I am so glad he had this pleasant experience.

My dad was very proud of what he did in the USCG and World War ll, he devoted his whole adult life to the VFW and the Disabled American Veterans. Dad was 100% disabled from the injuries he received while on CG 83-301.But I never once heard him complain of his injuries. He was a great dad to both myself and my brother devoting his time to trying to make our lives happy, sports, vacations, etc. He was a hard worker and I truly miss him. He died in 2006.