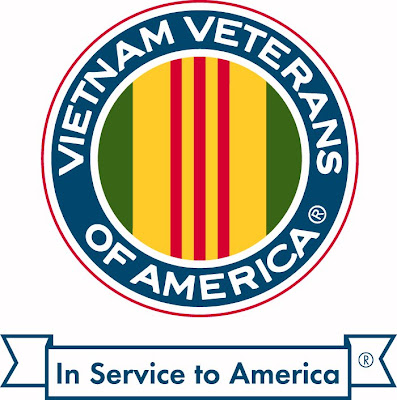 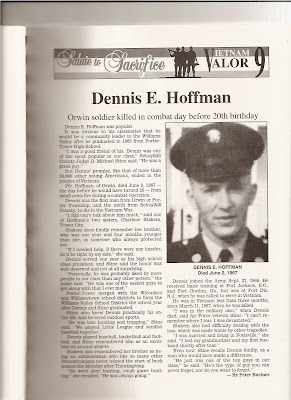 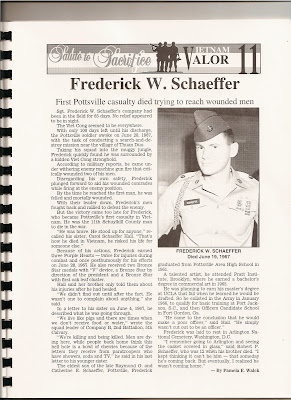 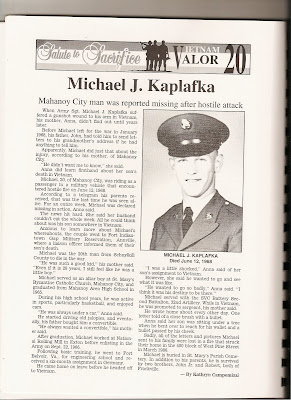 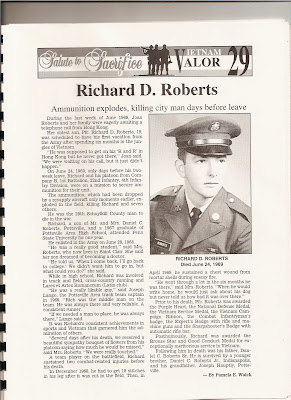 Today is Flag day,
This stirring poem was written about the battle flag of the 96th P.V.I. and states with pride and honor what an important part the flag played in the make up of this regiment. 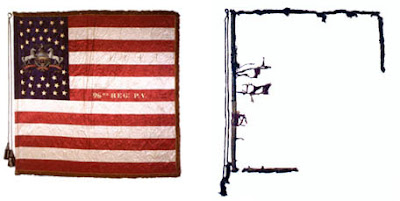 The regimental flag was to be protected at all costs, even with the lives of the men entrusted with its care, the color bearers and the color guard. To be selected as a member of the color guard was one of the most distinguished honors bestowed upon a Civil war soldier. To carry the colors into battle meant that one was in the fore front of the regiment. One knew that enemy fire would be focused on one's position and the possibility existed that one would be killed or wounded. It took a man of extraordinary courage to be a color bearer, and men from Schuylkill county courageously filled this post of honor often paying with their lives. Not once in battle did a Schuylkill county regiment permanently lose their colors to an enemy regiment.


The 96th Flag as it looked and today

TO OUR OLD BATTLE FLAG

True hearts own! By patriot hand
To valor thou wast given,
When the union of our land
By rebel blows was riven.

A thousand freemen followed thee
Mid sighs, and tears, and prayers,
To shield their true love, Liberty,
And scourge her base betrayers.

West point saw your folds baptized
With the waves of battle-
Saw your dreamings realized
Amid the muskets rattle.

By Chickahominy’s sad stream,
In Richmond’s air you quivered:
And, in the sparkle of its gleam,
Our serried ranks, were shivered.

Next, where Freedom’s son retired
Before foul treason’s minions
By Red Bull Run, you rose inspired,
And stretched your shielding pinions.

Then at Crampton’s Gap you led
Our charging ranks to glory;
Drooped o’er fierce Antietam’s dead,
And made yourself a story.


Thrice, at Fredericksburg, your stars
Gleamed on the Rappahannock;
Cold and Chill your Crimson bars
Lit Salem’s sanguine bannock.

At Gettysburg, where the true cross’d corps
Hurled back the foe victorious,
Mid powder smoke and cannons roar,
You waved serene and glorious.

And ever since, through storm and rack,
Unterrified, undaunted,
You’ve followed on curs’d treason’s track,\
Where’er its rag was flaunted.

Scarce a shred of you remains;
Your stars have ceased to sparkle;
Your virgin white bears battle stains;
Your bars no longer darkle.

Yet, with soldiers pride we look
Upon thy tattered splendor,
And read our trials, as from a book,
With feelings sad and tender.

Green be mem’ry of the braves
Who fell, thy cause maintaining,
A nation’s prayers illume their graves,
Their praise be ever gaining-

May bitter thoughts corrode their minds, ‘
and let their foiled ambitions
die with their names, like passing winds,
their lives be kind contrition’s.

Honored flag of Auld Lang Syne!
Fall Union’s foes before us,
Whilst a thread or star of thine
Remains to waver o’er us.

To read about the individual color bearers from Schuylkill County se my post for
Tuesday, November 27, 2007
Schuylkill County Color Bearers During the Civil War Only the Brave were Chosen
Posted by Stu Richards at 8:32 AM No comments: