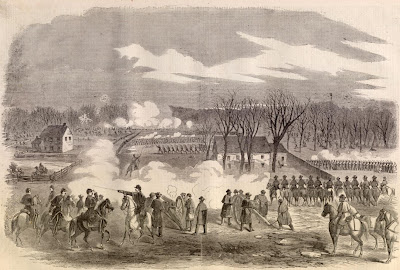 One of the first engagements after the Union defeat at Bull Run was a small engagement by Federal and Confederate foraging parties, five days before Christmas of 1861, at the town of Dranesville, Va.

The confederate command consisted of a foraging party of infantry and cavalry of Joseph Johnston's command. With the foraging party was a 150 men of J.E.B. Stuart's cavalry, and 4 regiments of infantry. The Union forces consisted of 5 Pennsylvania infantry regiments and a battery of 4 cannons. Both commands moved out simultaneously and meet in combat near the farm lands of Dranesville, Va.
Serving with the 6th Pennsylvania Reserves was a Schuylkill countian, Lieut. Jacob A. Bonawitz, who wrote a descriptive account of the fight, which would become a big morale lifting victory for the Union forces.

Dear --- We had a little fun on the 20th of December last in Dranesville with the rebels. I shall not enter into details, as I suppose you have seen the particulars of the fight in the papers.
We left our camp a little before daybreak on the morning of the 20th and started for Dranesville on a foraging expedition. We got as far as Difficult Creek when began throwing skirmishers out in front of our regiment. As company A, and our company K, are the two flank companies, we were thrown out on the left of the pike. Company A near the road, and my company on the left of the former. We started through the woods on quick time. I was the only officer in our company that day. The Capt. was in Washington, and the other Lieut. was at home on leave of absence. As I said before we started through the woods on quick time for some three miles, when we came out into a large clearing. I was about one mile from the regiments on a double quick. I started my skirmishers on a full run in order to keep in advance of the regiments, and we kept this up for four miles. Some of my men gave out, and fell back on the reserve that was coming on. It was pretty severe but we had to do it. After getting within a half a mile of Dranesville, there were some twenty shots fired at us, doing no damage, we kept on. I was now in an open field and just about to enter a pine thicket, when I discovered something wrong in there. I passed the word along the line of skirmishers to halt, which was done immediately. I then looked in the woods again, and saw one regiment of infantry, and one of Cavalry laying there not more than five rods from left hand man, while a Sergeant was not more than 20 paces from myself. I then passed the word along the line again, to rally on the road, and on the Regiment. When the Rebels observed this, they opened fire on us with muskets, and shot one of the men through the arm, this however did not frighten him much. He followed us. We got on the road and meet the Regiment. We were then ordered across the hill to support the left-our Battery. The balls were now flying like hail from the rebel infantry. When they saw us try to cross the hill, they opened their large guns on us. The shells and canister poured upon us. After getting near half way across, two of my men fell. One was shot through the side, and the other in the leg. They crawled behind a small bank near the pike, as we had no time to lose going over there. When I got a little further a piece of shell struck me on the leg tearing off one of my pantaloon legs, and scratching my leg slightly. We got a little further, when two more dropped, that had got in my company (strangers) They died in a few minutes: but we got across and now came our time for operation. Our Battery opened on them and the Rebels were soon laying in all kinds of shapes. Some with no heads on; some with no arms, no legs, and some you could not tell what they were. We soon silenced their battery. We then made a charge on them through the woods. I must admit they can run faster than we can by a good deal, but they could not run out of sight of our balls. The woods were full of them. There was one spot were we could scarcely get over the dead and wounded rebels. Our loss was 10 killed and 30 or 40 wounded. The Rebel loss was severe. There were 170 rebels buried the day after the fight and we brought in some 40 of them wounded and 14 prisoners. All in all, it was a complete victory for Uncle Sam. Our wounded are doing well in the hospital; are in good spirits, and express themselves anxious to have another chance at the rebels soon. In our Regiment their were three killed, and thirteen wounded, of which three belong to our company. The Bucktail Regiment; our Regiment, and the 9th suffered the most. The 10th and the 12th I believe, did not lose a man, as they were not in the hottest of the fire.
Yours &c.
Lieut. J.A.B.